A clinic in vivid storytelling

If you want a little lesson in livening up your stories, take a look at Roy Peter Clark’s analysis of a radio story by Wade Goodwyn, describing the monster tornado in Oklahoma.

This post is an editing exercise, something I haven’t done on this blog in a long time. It’s prompted by the following sentence, which I recently came across in a brief (party’s name changed):

Accepting this argument is to reward very generously Bigcorp for continuing its bad conduct.

When I first read the sentence, I did a double-take; I had to read it twice to figure out what generously was intended to modify.

What happened here was that the writer bent over backwards to avoid splitting the infinitive to reward. That’s too bad, because the English language has no rule against splitting infinitives. If I were the editor, the first thing I would drop the very and relocate generously to where it naturally belongs:

Accepting this argument is to generously reward Bigcorp for continuing its bad conduct.

Now that generously is where it naturally belongs, I see two more problems. First, the writer is using the indicative mood to describe something that is only a possibility: the court’s accepting Bigcorp’s argument. The sentence needs the subjunctive mood, which is used to describe things that are only possible but not certain:

Accepting this argument would be to generously reward Bigcorp for continuing its bad conduct.

We’re almost there—one more problem to fix. The sentence lacks parallel structure on both sides of the verb would be: a participial phrase one one side, and an infinitive phrase on the other. The writer evidently wants to equate the things on either side of the be verb. So the writer should use the same grammatical structure for those two things. One way to achieve parallel structure would be to convert the opening participial phrase to an infinitive phrase, to match what’s on the other side of the verb. Thus:

To accept this argument would be to generously reward Bigcorp for continuing its bad conduct.

The sentence is clearer than it was when we started, and it more accurately says what the writer was trying to say. But now something else bothers me: the verb would be. That verb does not convey the action that the writer is trying to describe. The verb needs to be reward, because (according to the writer) reward is what the court would actually be doing if it accepts Bigcorp’s argument. Thus:

Accepting this argument would generously reward Bigcorp for continuing its bad conduct.

We sacrificed the parallel structure, but we’ve gained more than we’ve lost. The sentence is  stronger because it’s more concise and because it has a stronger verb. (And by the way, there’s nothing wrong with splitting the verb would reward by inserting an adverb in between.)

Very superstitious writing on the wall—and many other places.

It’s good to know what you really shouldn’t do. But please let’s enjoy the freedom of knowing what, as writers, we can do. One of those things is starting a sentence with any part of speech.

I cannot talk about superstition without thinking of Stevie Wonder. So here is is. Whether or not you’ve had your daily dose of funk, enjoy. (If you have not, all the more reason to watch.)

Why I blog about things I barely know

Today’s Daily Meditation by Henri Nouwen describes the satisfaction I get from blogging:

Often we think that we do not know enough to be able to teach others. We might even become hesitant to tell others what we know, out of fear that we won’t have anything left to say when we are asked for more.

This mind-set makes us anxious, secretive, possessive, and self-conscious. But when we have the courage to share generously with others all that we know, whenever they ask for it, we soon discover that we know a lot more than we thought. It is only by giving generously from the well of our knowledge that we discover how deep that well is.

If you ever considered starting your own blog, maybe this will be a word of encouragement.

For punctuation geeks, an interesting decision by the U.S. 2nd Circuit

Does a modifying phrase following a list of nouns or phrases modify each item on the entire list, or only the last item? That depends on whether the modifying phrase is separated from the last item by a comma. So concluded the U.S. Second Circuit in AIG v. Bank of America, decided April 19. Writing for the court, Judge Leval gave this example: 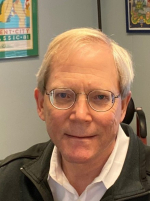