A recent addition to my office decor: my own Justice Ginsberg action figure. 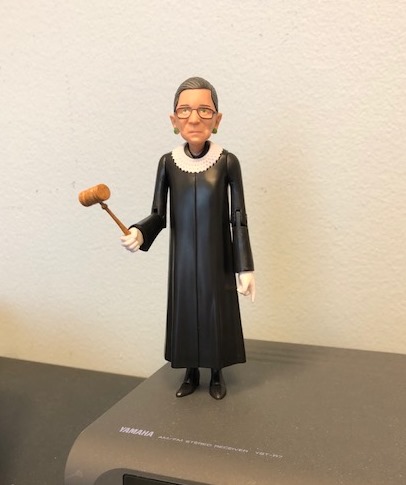 This item isn’t sold in stores. To get yours, follow this link.

Rehearing from a writ denial?

But in a recent decision, the Louisiana Third Circuit may have created an exception to this rule. In Trapp v. Allstate Property & Casualty Insurance Co., 18544 (La. App. 3 Cir. 9/19/18), 2018 WL 4472472, 2018 La. App. LEXIS 1764, 2018 BL 338092, the trial court rendered a partial summary judgment on liability, holding a defendant 100% at fault for an automobile accident. The defendant applied to the Third Circuit for a supervisory writ. According to the Third Circuit’s decision, the court initially denied the writ, but later changed its mind on rehearing:

We initially denied the writ, incorrectly believing that the Defendants-Relators had an adequate remedy on appeal. However, we granted rehearing based on our determination that the partial summary judgment on liability did not constitute an appealable judgment because it was not certified as a final judgment by the trial court pursuant to La. Code Civ. P. art. 1915(B).... Therefore, we will address the merits of the writ.

18-544, p. 1. What gives? According to the prior order granting rehearing, the court originally dismissed the writ application rather than deny it.