Let’s say a party disobeys an order compelling discovery. The discovering party moves for sanctions under La. Code Civ. P. art. 1471, and the trial court grants the motion, holding the recalcitrant party in contempt and striking its pleadings. Is the sanctions judgment final and appealable? According to the Fourth Circuit, it is. Celeste v. Starboard Mgt., LLC, 2016-1318 (La. App. 4 Cir. 11/6/17).

The facts and procedural history in Celeste are complicated; for this post’s purposes, here is the skinny version. After the defendants disobeyed an order compelling discovery, the trial court granted the plaintiffs’ motion for sanctions under art. 1471, finding the defendants in contempt and striking their affirmative defenses and reconventional demand. This judgment was signed on April 3, 2014, and notice of judgment was sent the next day. On May 1, 2014, defendants filed a “Notice of Intent to Take Supervisory Writs/Appeal,” but failed to pursue appellate review of the April 2014 judgment.

Fast forward to 2016, when the defendants filed a motion to reconsider the April 2014 judgment, and the plaintiffs filed a motion for summary judgment. The trial court denied the motion to reconsider as untimely and granted summary judgment in the plaintiffs’s favor. The defendants moved for new trial, and when that motion was denied, took an appeal. Among their assigned errors was the trial court’s April 2014 judgment striking their affirmative defenses and reconventional demand. The Fourth Circuit held that, with respect to the April 2014 judgment, the appeal was untimely. Citing two prior decisions (Stiltner v. Stiltner, 00-2079 (La. App. 4 Cir. 11/08/00), 772 So. 2d 909; and Pittman Constr. Co. v. Pittman, 96-1079 (La. App. 4 Cir. 3/12/97), 691 So. 2d 268), the Fourth Circuit held, “All contempt judgment are deemed final judgments, subject to immediate appeal.” Celeste, pp. 9–10.

In Wells One Investments, LLC v. City of New Orleans, 2017-0415 (La. App. 4 Cir. 11/2/17), the trial court rendered a judgment stating that Wells One’s motion for preliminary injunction “is hereby granted,” but did not state what the city was ordered to do or not do. The city appealed under La. Code Civ. P. art. 3612, which gives parties the right to appeal a “judgment relating to a preliminary or final injunction ....” But the Fourth Circuit dismissed the appeal because the judgment failed to name the party being enjoined and, contrary to La. Code Civ. P. art. 3605, failed to “describe in reasonable detail, and not by mere reference to the petition or other documents, the act or acts sought to be restrained.”

The lesson from this case seems to be that any appealable judgment—not just a final judgment—must contain decretal language, naming the winning and losing parties and spelling out the precise relief being granted or denied.

Advice from La. appellate judges: Try to stay in the circuit.

Here is one takeaway I got from last week’s LSBA Advanced Appellate Practice Seminar: The judges of the court of appeal prefer citation to their own courts’ cases over cases from other Louisiana circuits. So when citing a case for a legal proposition, try to find one from whichever circuit your brief is going to. Cite cases from other circuits only when you can’t find one just as good from within the circuit.

This isn’t surprising. In my observation, Louisiana’s appellate courts have been moving away from jurisprudence constante and toward stare decisis, meaning that they consider their own precedents as binding. I don’t have anything empirical to back this up; just my own observation of anecdotal stuff.

Only nine days are left before the Louisiana State Bar Association’s Advanced Appellate Practice Seminar on November 16 in New Orleans. If you’re reading this post, then this seminar is for you. It’s been approved for 6.25 hours of specialized appellate CLE in Louisiana. The faculty includes Justice James Genovese of the Louisiana Supreme Court, eight judges of the Louisiana courts of appeal, some smart lawyers, and me. For more information about the seminar, follow this link. To download the registration form, follow this link.

How to answer questions at oral argument

Over at Above the Law, Mark Herrmann gives sound advice on answering questions during oral argument. The two best words to begin your answer: “yes” or “no.” (Not both; you have to pick one.)

This wisdom is ancient. See Matthew 5:37.

What are the odds that a Louisiana court of appeal will grant a pro se litigant’s application for a supervisory writ? Not bad, according to the Louisiana Supreme Court’s 2016 Annual Report. Overall, the writ-grant rate for pro se applications is 17%, which compares favorably with the 23% writ-grant rate in counseled cases. Here are all the numbers: 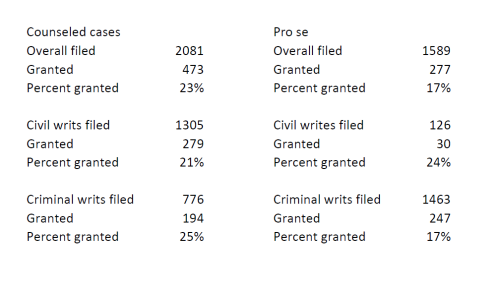