When litigants attempt to appeal a non-appealable judgment, the question rises whether the court of appeal can review the trial court’s judgment under its supervisory jurisdiction. In at least four of the five circuits, the answer is “maybe,” if the motion for appeal was filed within the 30-day period to apply for a supervisory writ under Unif. R. 4-3. (I couldn’t find any cases from the Second Circuit answering this question.) Here is a breakdown of the cases, circuit by circuit.

Biosonix, LLC v. Luke, 2014-1207, pp. 4-5 (La. App. 3 Cir. 5/27/15), 165 So. 3d 399, 401 ("Had the motion for appeal been filed within this thirty-day window, we would have deemed it a timely notice of intent to seek supervisory writs. However, the Motion for Appeal was filed after the thirty-day period lapsed. Thus, even if we were to allow Plaintiffs time to perfect a proper writ application, we would have to dismiss that writ application because of untimeliness.").

Board of Supervisors of LSU v. Mid-City Holdings, LLC, 2014-0506, pp. 3-4 (La. App. 4 Cir. 10/15/14), 151 So. 3d 908, 911. (This is the leading case on this issue in the Fourth Circuit. The court notes that it has “ordinarily but not necessarily” converted appeals of non-appealable judgments into applications for supervisory writs when the motion for appeal was filed within 30 days after notice of judgment. The court also cited Herlitz Construction Co. v. Hotel Investors of New Iberia, 396 So. 2d 878 (La. 1981) as supporting the exercise of its supervisory jurisdiction.)

McGinn v . Crescent City Connection Bridge Auth., 2015-0165, pp. 4–6 (La. App. 4 Cir. 7/22/15), 174 So. 3d 145, 148 (The court cited two conditions that must be met to convert an appeal into a supervisory-writ application: (1) motion for appeal filed within 30 days after notice of judgment, and (2) immediate appeal “necessary to ensure fundamental fairness and judicial efficiency, such as where reversal of the trial court’s decision would terminate the litigation.” Because the motion for appeal was filed more than 30 days after notice of judgment “we decline to exercise our discretion to consider the motion for appeal as an application for supervisory writ.”)

Patterson v. Fed Ex Ground Package Sys., Inc., 08-1297, p. 4 (La. App. 5 Cir. 3/24/09), 10 So. 3d 794, 796 (“[T]he motion for appeal was filed within the time requirements for a writ application. By en banc meeting of December 9, 2004, this Court decided that converting appeals to writs will be left to the discretion of the panel. Under the circumstances of this case and in the interest of justice, we deny FedEx’s Motion to Dismiss Appeal, convert the appeal to a writ, and review the matter under our supervisory jurisdiction.”)

Note that the granting of a supervisory writ is always discretionary. Thus, a party is never entitled to have its appeal of a non-appealable judgment converted to a supervisory writ, even if the motion for appeal was filed within 30 days after notice of judgment.

On a personal note, I'm happy to announce that I passed the exam for certification in appellate practice by the Louisiana Board of Legal Specialization. (What a relief!) Now that I’m over that hump, I hope to return to more regular posting here. 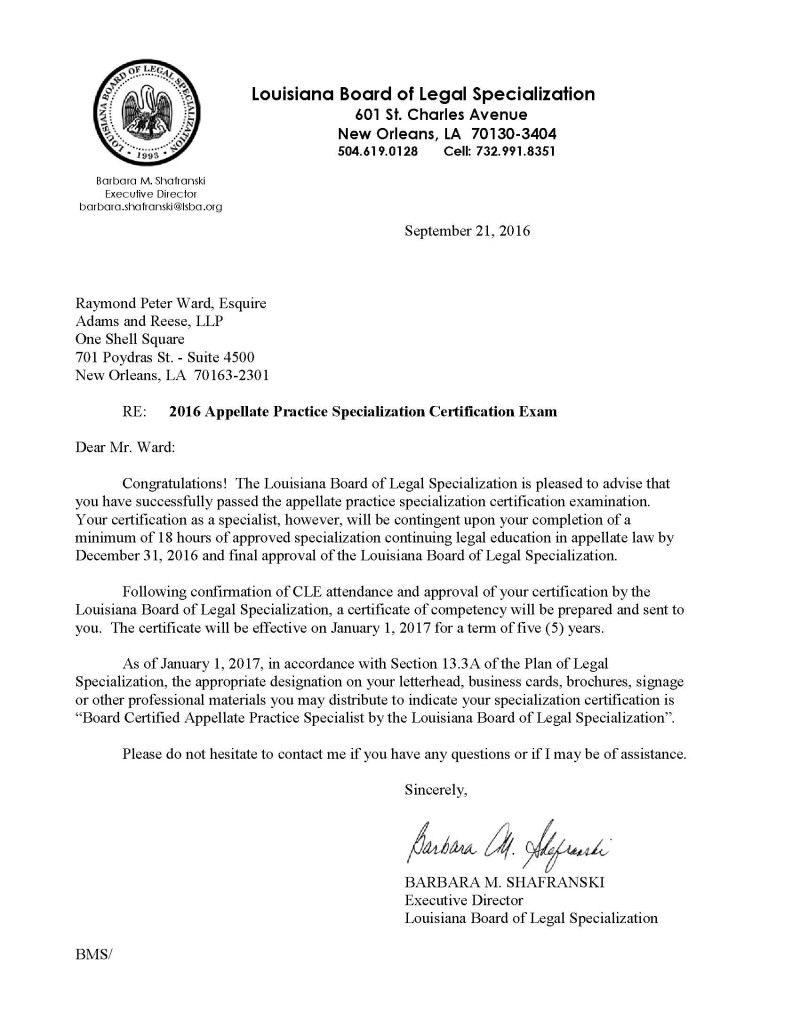 At Above the Law, inside counsel Mark Herrmann offers 5 tips for briefwriters who are already good at what they do. To read his tips, follow this link.