Trials or appeals? Pick your passion.

Would you rather be a trial lawyer or an appellate lawyer? At Above the Law, Mark Herrmann has a thoughtful post weighing the pros and cons of each career path. Ultimately he recommends following your heart by pursuing the kind of work you enjoy doing. But do so knowing what you’re getting yourself in for.

Mark notes that, nationwide, most big firms don’t have pure appellate practices. “Rather,” he says, “they have ‘appellate and motions’ practices, or some such thing, which reflects the truth that most ‘appellate’ lawyers spend much of their time briefing major issues in trial courts and not actually handling appeals.” In Louisiana, it would probably be more accurate to describe an appellate practice as “appeals and writs.” This is because, excluding pro se writ applications, the workload of Louisiana courts of appeal is split about 50-50 between appeals and writ applications. Thus, most Louisiana appellate lawyers I’ve talked to say that writ applications make up a substantial percentage of their practices.

So you want to apply for rehearing in the LASC

You probably knew that getting a rehearing from the Louisiana Supreme Court is difficult. You may not have known how difficult that task is. Here are the numbers from the LASC’s 2014 Annual Report:

Let’s say that the Court, in ruling against your client, split 4-3. To turn the case around, you only need to change one justice’s mind. What are the odds of doing that? Probably close to zero. I recently researched this question, examining all decisions in which the LASC voted 4-3 to deny rehearing, going back to 2010. In every single case, the original opinion was also 4-3, with the same 4 justices in the majority and the same 3 in the minority. In every 4-3 case in which a party applied for rehearing, the vote on rehearing was identical to the vote on original hearing. According to the results since 2010, litigants have actually had better success changing a justice’s mind when the original vote was 5-2 or 6-1 .

This is not to say that you shouldn’t apply for rehearing if you come out on the short end of a 4-3 vote. But before you do so, be aware that the chance of success may be lower than you think.

Before you toss the latest issue of the Louisiana Bar Journal, check out the interview with LASC Associate Justice John L. Weimer. He is a man of many talents and interests. Among other things, he rides a Harley, and he painted the picture on the magazine cover.

Workload of La. courts of appeal: writs versus appeals 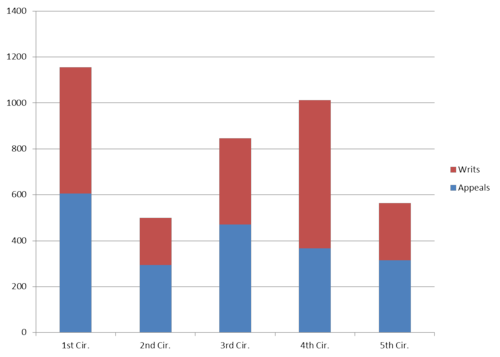 Here is a graph I just prepared for an upcoming CLE presentation, comparing the numbers of appeal and writ applications (excluding pro se writs) in the five Louisiana circuit courts for 2014. The first time I saw similar numbers for 2013, I was surprised. But the numbers really aren’t surprising. For a long time, my own work on cases in the Louisiana appellate courts has been split about 50-50 between writ applications and appeals. The same is probably true for most Louisiana appellate practitioners. I once heard Judge Terri Love remark that her own court (the Fourth Circuit) has become more a court of writs than a court of appeal. The numbers support her description.

You can find the raw numbers numbers and other statistics in the Louisiana Supreme Court’s 2014 Annual Report.

Writing briefs for the tablet-reading judge

The Lawyerist has an interesting article by Jason Steed on writing briefs for judges who read them on tablets. To read it, follow this link.

An answer to the appeal is as good as a cross-appeal—sometimes.

Non-Louisiana practitioners may be asking, “What is this answer to an appeal?” It’s a procedure authorized by La. Code Civ. P. art. 2133(A), under which an appellee may seek to have the trial court’s judgment modified, revised, or reversed in part. It’s usually much less expensive than a cross-appeal; while a cross-appellant may have to pay part of the cost of preparing and lodging the record, an appellee who answers the appeal need only pay a filing fee of $74 to $124 (depending on the circuit). And you always have more time to answer the appeal than you have to cross-appeal. Compare La. Code Civ. P. art. 2087(B) (time to cross-appeal) with art. 2133(A) (time to answer an appeal).

A few years ago, Louisiana lawyer S. Mark Tatum wrote an excellent article on this topic for the Louisiana Bar Journal, entitled Questions About Answers: Problems with Answers to Appeals and Protective Cross-Appeals Under Louisiana Procedure, 57 La. B. J. 306 (Feb./Mar. 2010). Mark’s article is a must-read for any lawyer practicing in Louisiana’s appellate courts.

A party who is satisfied with a judgment, and who does not file a notice of appeal or a petition for review, is, nevertheless, a party to the appeal or review whose arguments must be heard, and in support of the judgment in his favor he may present any argument supported by the record, whether it was ignored, or flatly rejected, by the court below. This principle generally applies to all manner of review proceedings, although the discretionary nature of the grant of certiorari by a supreme court may make its application less certain in certiorari cases.

The federal rule is identical. The appellee in a federal appeal “may, without taking a cross-appeal, urge in support of a decree any matter appearing in the record, although his argument may involve an attack upon the reasoning of the lower court or an insistence upon matter overlooked or ignored by it.” U.S. v. American Ry. Express Co., 265 U.S. 425, 435 (1924). See also Blum v. Bacon, 457 U.S. 132, 137 n. 5 (1982) (“It is well accepted ... that without filing a cross-appeal or cross-petition, an appellee may rely upon any matter appearing in the record in support of the judgment below.”).

Please note, though, that this rule applies only if you do not seek any modification of the trial court’s judgment. If you seek to have the judgment modified in the appellee’s favor, you must take a cross-appeal or (in Louisiana state court) answer the appeal. In Louisiana, see La. Code Civ. P. art. 2133(A). The choice of answering the appeal versus taking a cross-appeal is itself an interesting topic, which I’ll try to cover in a future post.

1 I’ve covered this topic before, but that post is more than two years old and does not address federal appeals.

Effective January 1, 2016, Act No. 422 of the latest Louisiana legislative session is going to make substantial changes to Louisiana’s summary-judgment procedure. If you practice civil litigation in Louisiana, you must familiarize yourself with these amendments. Appellate practitioners will be especially interested in new art. 966(H), which requires an appellate court to schedule a supervisory-writ application for briefing and oral argument before reversing the denial of summary judgment.

To read the act and accompanying revision comments, follow this link.