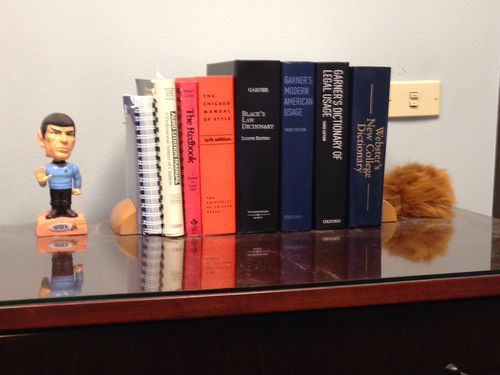 Like any lawyer, my office at work has bookshelves full of books. But there are a few books that I refer to so often that I keep them literally within arm’s reach of my desk chair. Why? Because when in doubt, I always look it up. Also, when I have a difference of opinion with a colleague over matters of form or usage, I have an authoritative source handy to resolve it.

I don’t necessarily have the latest edition of some of these references. If a new edition is truly an improvement over the prior edition, I’ll invest in it. But in general, I figure that the important rules don’t change every other year. So I am happy to be a cheapskate and rely on the prior edition as long as it still works. Anyway, here they are. From left to right:

Two citation manuals: The Bluebook (17th ed.) and the ALWD Citation Manual. I use ALWD primarily because I find it better suited for practitioners, and because, where it departs from the Bluebook, I find its rules more sensible. Nevertheless, I keep the Bluebook handy for when I need to cite something so obscure and esoteric that it’s not covered by ALWD.

The Redbook, by Bryan A. Garner. The Redbook is not a citation manual; it is a style manual. Most of its comment reflects generally accepted rules and preferences; on a few points it reflects Garner’s preferences. But Garner is a good judge of these things. And it’s good to have and to follow some style manual, if only for consistency’s sake.

The Chicago Manual of Style (15 ed.). The CMS covers things that Garner doesn’t. It’s written for journalists, but it works well for anyone doing expository writing.

Garner's Modern American Usage. If there is another usage dictionary out there for writers of American English, I don’t know of it. Garner’s is thorough, good, and reliable.

Garner's Dictionary of Legal Usage. Admittedly, this book overlaps with Garner’s Modern American Usage. But it hits some areas, peculiar to legal writing, that the other doesn’t.

The dictionary on the end. This book was a freebie in my law firm’s supply room. So I picked up a copy and put it with the other handy references. My firm has a subscription to the on-line Oxford English Dictionary, so if I need the most serious English dictionary on the planet, I have it on my computer. But often, I just want to look up a spelling, or I just want to confirm that my idea of what a word means is what everyone else thinks it means. For those purposes, this is a serviceable dictionary.  (At home, I have Merriam Webster’s Collegiate Dictionary and The New Oxford American Dictionary.)

What I don’t have in my office, but probably should, is a handy grammar reference. I like A Grammar Book for You and I ... Oops, Me!, by Ed Good, but that is more a book to read cover-to-cover and learn from than to pull off the shelf when you need to look up something in 30 seconds. So if anyone knows of a solid, user-friendly grammar reference book, please leave a comment or send me an e-mail.

p.s. Spock and the tribble are lousy bookends. But they do frame the real bookends nicely.

A briefwriting lesson in what not to do

It’s never a good idea to belittle your opponent or your opponent’s argument. If you do, you might find yourself on the receiving end of an opinion like this, issued today by the U.S. Sixth Circuit:

There are good reasons not to call an opponent’s argument “ridiculous,” which is what State Farm calls Barbara Bennett’s principal argument here. The reasons include civility; the near-certainty that overstatement will only push the reader away (especially when, as here, the hyperbole begins on page one of the brief); and that, even where the record supports an extreme modifier, “the better practice is usually to lay out the facts and let the court reach its own conclusions.” .... But herethe biggest reason is more simple: the argument that State Farm derides as ridiculous is instead correct.

Are you looking for quality appellate CLE? I have two recommendations.

On October 7–8, the Bar Association of the Fifth Federal Circuit is holding its 2013 Appellate Advocacy Seminar. A unique feature of this seminar is that it includes observation and critique of real oral arguments in real cases. Many of us have attended CLEs featuring a mock argument; the Fifth Circuit seminar is the only one I’ve been to that gives you a live, in-person look at the real thing. The program also includes a writing workshop, one hour each of professionalism and ethics, and other promising sessions. The seminar will be held in New Orleans at the Pan Am Center and the Fifth Circuit courthouse. For more information, click here.

If your budget allows a trip to San Diego for CLE, then check out the Appellate Judges Education Institute’s 2013 Summit, scheduled for November 14–17. The AJEI Summit brings together state and federal appellate judges, lawyers, and staff attorneys for education and socializing. A good program, and a lot of fun. If you’re interested, click here to download the brochure.

Help me plan my next appellate CLE class.

Next month I will one again co-present the appellate hour for the Louisiana State Bar Association’s Bridging the Gap seminar. The seminar is designed for newly minted lawyers to “bridge the gap” between law school and real-world practice.

I’ve taught this CLE hour for several years now, but this year, I’m thinking of re-inventing the presentation. In past years, I’ve attempted to cram an entire course in Louisiana appellate practice into that one hour. What I’d like to do instead this year is focus on a smaller set of points. Consider the working title “The Top 10 Things [more or less] I Wish Someone Had Told Me About Appellate Practice.” Trouble is, I don’t have 10 things yet. That’s where you come in. What topics would you include on your top-10 list? Let me know, either by leaving a comment or sending an e-mail.

Here are a few topics I probably will include, in no particular order:

Don’t let this happen to you.

Uniform Rule 2-12 governs the form and content of a brief. What happens when you attempt to file a brief that fails to comply with Rule 2-12? You may get one of these—which is not bad unless (like most lawyers) you waited until the last day to file your brief. 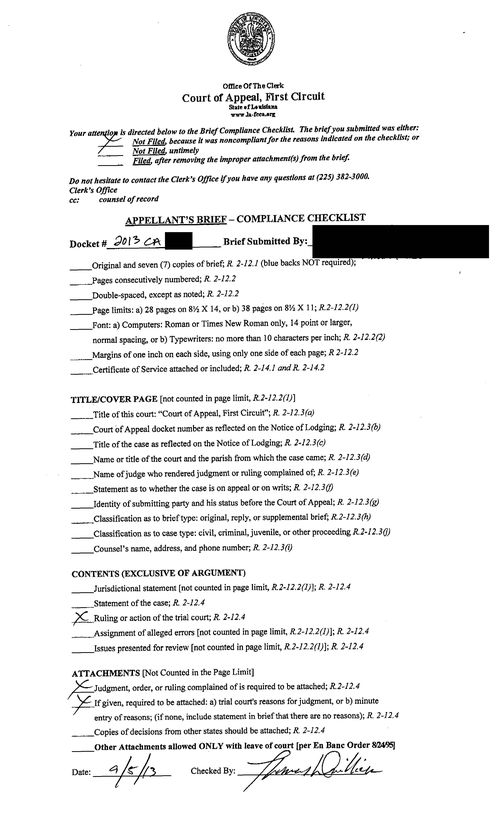